Tasmania’s south-east has been hit with a record-breaking storm that’s left one man dead, resulted in dozens of flood warnings and left thousands more without power.
And there is a warning more extreme weather is on the way.
Police said a pedestrian, 81, was struck by a car near Claremont in Hobart at around 9pm last night and died at the scene.
“Initial investigations suggest it was raining at the time. The driver of the vehicle remained at the scene,” police said in a statement.
A record-breaking amount of rain was dumped on Hobart and large hail fell over some suburbs.
Mount Wellington in Hobart was hit by 105mm of rain, a two-year high, and 107km/h winds were recorded; a three-month high.
Hobart Rivulet flooded overnight. 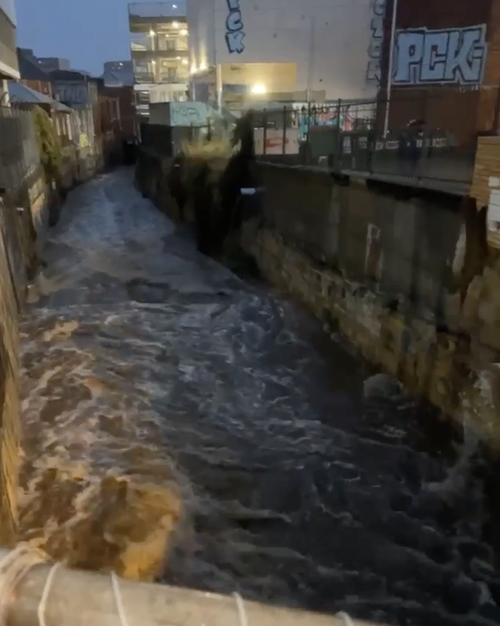 Water levels had dropped by this morning but video captured by local Kat Joanne shows the rivulet is still raging.
“Hobart gain(ed) more than a month’s rain in 12 hours, its heaviest in four years, leading to flooding,” Weatherzone said.
State Emergency Service (SES) said they’ve responded to over 40 requests for assistance in greater Hobart and south eastern Tasmania since the deluge.
“Responses are being prioritised based on the greatest need,” SES said.  Around 10,000 lightning strikes were recorded.
TasNetworks said about 30,000 homes were left without power last night; nearly 1000 are still without power, according to the energy provider’s website.
“Areas affected include Montagu Bay, Rose Bay, Rosny, Brighton, Honeywood, Old Beach, Tea Tree and surrounding areas,” TasNetworks said on Twitter.
A flood watch is current for South East, Huon, Derwent, North and North East catchments.
And a moderate flood warning has been issued for the Jordan River, north-west of Hobart.
Minor flood warnings are also in effect for the following waterways: South Esk River, Macquarie River, River Derwent, Coal River, Huon River.

Buyer’s Agent: Krishan is on your side

Australian invited to Queen’s funeral thought it to be unreal, a ‘scam’

Team Voice Aajkal - September 26, 2022 0
Tell us more about the show? Since childhood we have been hearing about the story of Alibaba and Chalis chor, but our show Alibaba Dastaan-e-Kabul is not a...