Queen Elizabeth II has shrugged off recent health issues to attend a service of thanksgiving for her beloved husband, Prince Philip.
She entered the cavernous Westminster Abbey through a side door on Tuesday to shorten the distance to her seat.
The monarch entered the church on the arm of her second son, Prince Andrew, then separated from him to walk to her seat alone, easing concerns about “mobility issues” that have limited her public appearances in recent months. 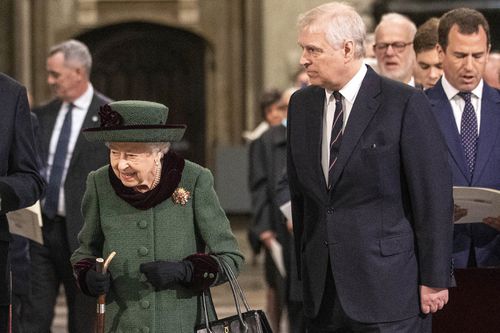 Her choice of escorts will be seen as a vote of support for Andrew after he settled a lawsuit linked to his relationship with the late, convicted sex offender Jeffrey Epstein.
The Queen; her daughter, Princess Anne; and Camilla, the Duchess of Cornwall; were all dressed in dark green, echoing Philip’s livery colour of Edinburgh Green.
Also wearing green was Doyin Sonibare, 28, who won top honours from the Duke of Edinburgh Award, created by Philip to teach young people confidence and life skills through outdoor activities and community service. 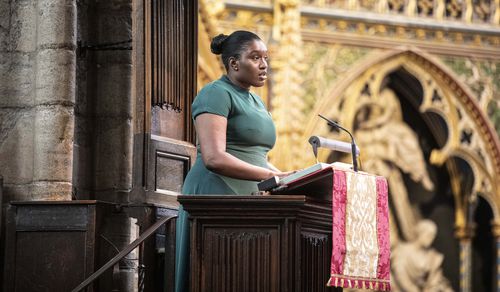 Ms Sonibare delivered the primary tribute to Philip, thanking him for creating a program that gave her the tools she needed to get her first job, go on to university and now study for a PhD in sickle cell research.
The 95-year-old monarch was deeply involved in planning the event, but she has experienced unspecified mobility issues in recent weeks and her presence at the event was unclear.
Elizabeth, who recently recovered from COVID-19, didn’t go to a Commonwealth Day service at Westminster Abbey earlier this month, though she continued with other scheduled engagements. 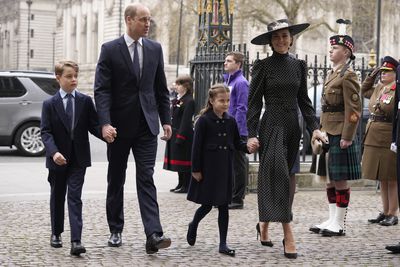 The 95-year-old monarch was deeply involved in planning the service, which included hymns and tributes from the charities Philip supported. Such touches weren’t permitted during his funeral last year due to pandemic control measures.
About 1800 family members and guests attended the memorial.
Only 30 people attended last year’s funeral, conducted under the strict COVID-19 lockdown rules then in place that forced the Queen to sit alone wearing a black mask as she mourned the loss of her husband, who she called her rock.
Philip died on April 9 last year, at age 99.

Queen Elizabeth’s coffin lowered into vault ahead of private burial

Team Voice Aajkal - September 26, 2022 0
Tell us more about the show? Since childhood we have been hearing about the story of Alibaba and Chalis chor, but our show Alibaba Dastaan-e-Kabul is not a...