A column published in a major Australian newspaper that suggested tennis ace Nick Kyrgios should surrender his passport and be deported has been labelled “racist” by a number of industry professionals.

Columnist Kate Halfpenny wrote in the online article headlined It’s time to kick Nick Kyrgios off the island that the Canberran, who was born in Australia to a Greek father and a Malay mother, should go.

“Is there a way to revoke Nick Kyrgios’ Australian passport and kick him off the island, so we can stop being linked to this grub?” Halfpenny wrote for The Age and Sydney Morning Herald.

The opinion writer was seemingly fed up with Kyrgios’ antics during the opening two rounds of the prestigious Wimbledon tournament. 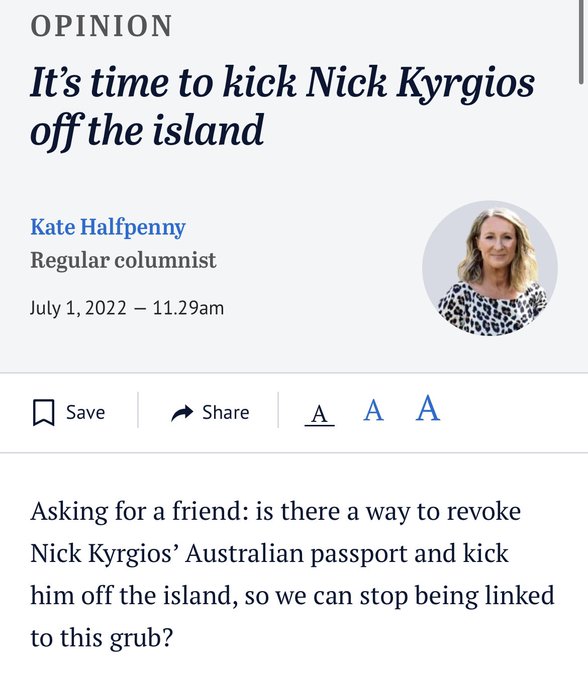 The 27-year-old was fined $14,500 for spitting in the direction of fans he said heckled him during his win over local hope Paul Jubb.

“On Tuesday, after spitting at hecklers, jeering at officials as ‘snitches’ who were ‘in their nineties’ and having a crack at his nonplussed opponent Paul Jubb, Kyrgios couldn’t shut up about being ‘disrespected’.”

She went on, compare the Aussie to “a five-year-old”.

“You’re the big fat centre of your world. You never see the sport which has made you a super-rich household name from the perspective of any other stakeholders,” Halfpenny wrote.

But it was the comments about Kyrgios being deported that some thought went too far.

“It’s times like this we miss Shane Warne,” she wrote.

“How good if Warnie could have a quiet word with Nick about the power of owning mistakes. Of how to become a globally adored ambassador for Australia. But he can’t.

“So, Plan B: Kyrgios surrenders the passport, extinguishes his torch and finds a home more suited to his sensibilities. Like Grub Island, as per Roy and HG’s famous Grub of the Year quest. He’s qualified enough to be mayor.”

MUST READ  Fourth patient with Japanese encephalitis confirmed in NSW

On social media, a number of journalists called her out for her remarks.

The deputy editor at youth publication Pedestrian.TV, Jim Malo, wrote alongside a screenshot of Halfpenny’s column: “A little Friday racism, as a treat.”

He continued: “Not sure why anyone would think it would be a good idea to write something about revoking the citizenship of a man regularly targeted because of his race. Just leave the c*** alone. He’s not exactly Australia’s sweetheart but you can criticise him in a non-racialised way.”

It was a sentiment shared by others.

ABC reporter Sarah Dingle wrote on Twitter: “Nick Kyrgios was born here. What exactly are you suggesting.” She included the hashtag #racism.”

The Guardian’s Josh Butler wrote on social media: “Even if you don’t like Kyrgios, there are a million ways to make this point without suggesting (twice) he ‘surrenders the passport’.”

Family of four on long-distance trip disappears in NSW outback

Why has the U.S. become the most sought-after destination for Indian immigrants?

Chris Minns (Leader of Opposition, NSW) in conversation with Navneet Anand
«
Prev
1
/
519
Next
»

Man accused of stabbing Sydney woman was best man at her...

Man accused of stabbing Sydney woman was best man at her...

Lumpy skin disease in cattle spreads, over 50,000 cattle vaccinated in...